Agroecology to feed The world with healthy food - Ejustice 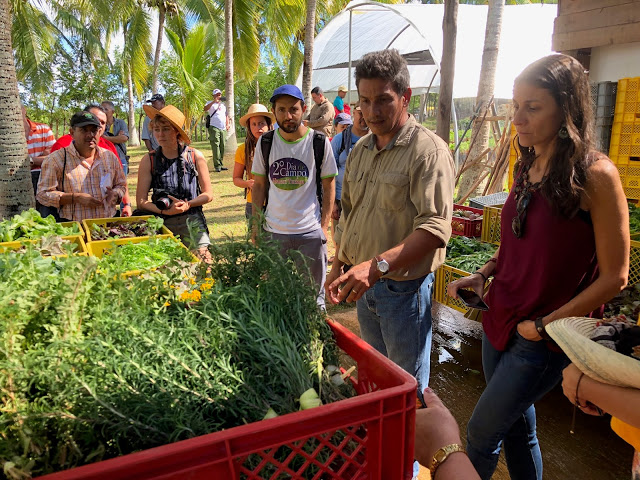 Fernando Funes is a Cuban academic who left his teaching job to become a farmer. His two Ha land produce Lettuce and other salad plant to meet the demand in Cuba and even export to France and Belgium. His bee hives produce honey for the local and international market. Few kilometers away former horse raiser Alexander manage ecological farm “La Burgambilia” which produce vegetables such as Brinjal, Tomato, Pumpkin, salad plants and other varieties. He expertise on keeping stingless bees, a species  found in  the Cuban mountains. His European verity of bee hives have given to Mario.

When someone want to become a farmer he/she can apply for a land to the government if they don’t already own a land. They will be given knowledge to manage the farmland in an ecological way and once ready the farmland will be recognized as an agroecology farm. The government insure the farm land for crop failures due to climate or other disasters. Government even help to transport Mario’s bee hives to other nearby locations time to time  to make available adequate flowers for the bees.

They are members of a Credit & Services Cooperativa Credito y Servicios (CCS) which government of Cuba has able to put together soon after the Cuban revolution across the nation. CCS and Cooperativa Produccion  Agropecuaria (CPA) are two different cooperatives established by the Government guaranteeing that the members produce the food for the nation and percentage of their production is purchased and distribute to the local consumers in an affordable price. Now, over 400,000 farmers are members are attached to more than 4000 Cooperatives. Both men and women farmers who are ready to contribute their land to the Cooperative can become a member. They also have enterprises too and cover both urban and rural agroecological gardens. The farmers themselves can sell some crops at the local market. Based on the different type of sales they pay the taxes to the government. They can also involve in the decision on the taxes.

Each Cooperative society  has a local farmer members who then elect their board members. Both men and women in the cooperative are being elected to the board. They go from village level to provincial level to the national level. Every CCS and CPA member is a  members of the Association Nacional de Agricultores Pequeños Dirección Nacional(ANAP) which is a political association established in 1959 during the Cuban Revolution. So they are represented at the highest political level. We eyewitnessed the election process at the Assembly in the Alquizar municipality. Every cooperative has an agroecologists and other experts. Every village has a Doctor look after by the Cooperative. They have even supported the young generation for education to become professionals. They give free foods for the people and children suffer from cancer or other long term sicknesses. Cuban agroecology farmers have a better housing and dignified life. It’s a highly systematic process developed by the Government of Cuba to feed eleven Million Cubans.

The Cooperatives have tractors, other farming equipment and the irrigation systems provided by the government ore purchased by them. Sixty percent of this fleet is now in the yards due to the blockade. But the agroecology farmers haven’t stop their responsibility to meet the food production target given to them.

The agroecology farmers in Cuba do not have to face the competition with the private corporate producers and the foreign imports. They have a better environment for concentrating the production without agrochemicals, hybrid seeds and GMOs. There is no bad influence by the dirty corporate giants and neoliberal policies. The political system has already absorbed these threats through its revolution. But they have difficulties in accessing export market due to the blockade.

However, agroecology is not just a farming and sustainable food production chemically free. It is fundamentally a system of production in ecologically friendly way with organic fertilizer and biological pest control. It is a system of soil improvements without damaging the soil organisms. It is also a system that production, storage transport and even reach to the consumers to provide affordable healthy food for people. It needs sound policies, scientific knowledge, research and development, guaranteed pricing mechanism, crop insurance and assured market. Much more than that, it requires a good attitude. Cubans have built that sprit over hundreds of  year struggle against the neoliberal colonizers. They follow the slogan of their supreme leader Fidel Castro “Saving mother earth is saving our life”.

Seventh Congress of the ANAP brought together over 300 farmers and agroecology promoters attached to FOEI strategic partner La Via Campasina representing Latin American countries, Europe Africa and Asia to Cuban Capital Havana from 15th November for a one week to learn the Agroecology experience in Cuba and share the experiences in own countries. FOEI delegation had the opportunity to learn from these experiences to build its advocacy across the world.( END)