Dismantle Patriarchy- Not the Planet - Ejustice 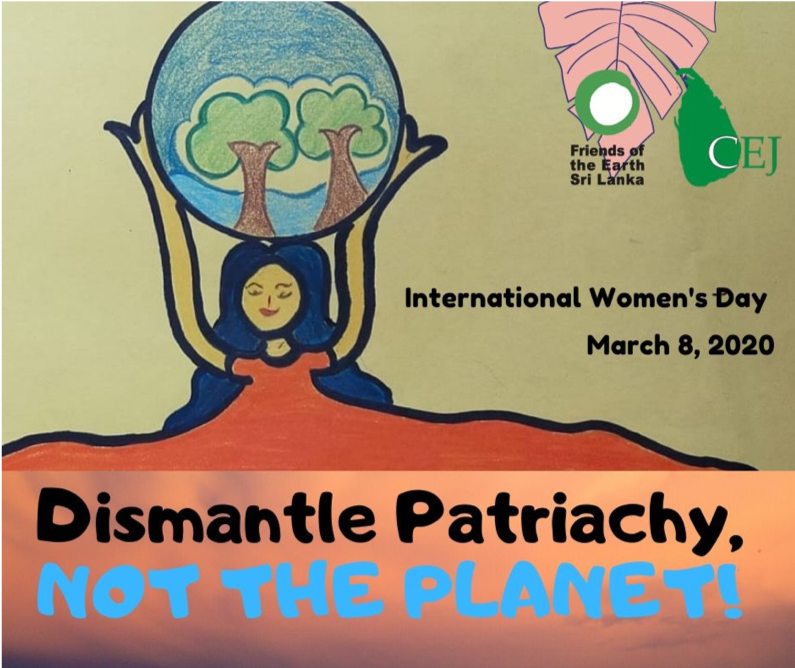 Since 1931, where Sri Lanka gained the ‘Universal Suffrage’ which allowed all Sri Lankan citizens to participate in the democratic process, women had the constitutional freedom and right to vote and participate in political activities. The country elected Mrs. Sirimavo Bandaranayake as the world’s first female prime minister in 1960 and elected Mrs. Chandrika Bandaranayake as the country’s first female executive president in 1994. Moreover, Sri Lanka’s ranking in the Human Development Index (HDI) has raised from 72 to 71 out of 189 countries, maintaining the country’s status as the best performed in South Asia. Labor force participation of women recorded as 34.1% and women hold senior positions in the government sector as well as private sector. However, women participation in politics is not up to the satisfactory level in the parliament, provincial councils as well as local authorities. In fact, Sri Lanka was ranked 182nd out of 190 countries in Inter-Parliamentary Union (IPU) ranking of female representation in parliament as of March 2020.

Local Authorities Elections (Amendment) Act No. 1 of 2016 which introduced a mandatory quota of 25 percent for women through a one-third increase in the total number of seats at the local government level, pradeshiya sabas, Urban Councils and Municipal Councils was believed to be a progressive action in terms of dismantling patriarchy. Yet what still holds it back.  We can deduce several reasons

The new election system is a hybrid one. It is a combination of first-post-past (FPP), and the proportional representation (PR) system. 60 percent of candidates will be selected according to the FPP system, while the other 40 percent will be selected according to the PR system.  If political parties which get less than 20 present of the total votes and less than 3 members, such parties are not bound to fulfill the female quota. This also has affected less female getting elected to the parliament or any other local council.

Unless you have a political background, it is a struggle even to get nominations from political parties. You have to have enough money to run campaigns, enough connections to get support from and get nominations. But other women who came from non-privileged households do not have such opportunities. Therefore patriarchy exists in political parties as well.

Women are viewed differently to men through the patriarchal public gaze – their ‘physical attributes, sexuality and morality’ are focused on more than their ‘intellectual capabilities and achievements’. Political parties have shown a lack of commitment to recognize women as worthy candidate or work towards strengthening women’s roles as political leaders. This also has negatively affected the society as there is a trend that celebrities, actors are entering the political arena as candidate by political parties for very political reasons as to show their gender sensitive symbolically.

General dislike of the society towards politicians as they often engaged directly or indirectly on illegal businesses such as drugs or liquor, bribery and environmental crimes such as illegal logging, encroachment, sand mining etc  Therefore, majority of women in Sri Lanka hesitate to engage in politics as they think politics is something that does not suit women.

Social media is one of the newest arenas through which women experience psychological violence. Celebrity women who participate as candidate may find social media as a positive medium through which to publish her political identity and share her beliefs. Yet, paradoxically it is also where she has faced the greatest level of harassment.

The 2030 agenda to achieve 17 sustainable development goals (SDG’s) adopted by world leaders in 2015, embody a road map for progress that is sustainable and leaves no one behind and gender equality is one of the main SD goal. Therefore, increasing women’s participation in politics is essential to fight women related issues. Women’s voices and issues related to them are not heard enough in Sri Lanka. Fighting women’s right should not be restricted to few high-class ladies in Colombo who want to win their right to purchase liquor for themselves but real issues of women such as rape, child abuse etc. During the last presidential election campaign in 2019, free sanitary napkin for women was a promise given by one of the candidate from a major political party. However, majority of the people did not welcome this as a good initiative. There were large criticisms and there was not enough women voice to support this. Clean water and Sanitation was one of the main sustainable development goals women seems to be suffering at large due to lack of clean water and sanitation facilities.

Also, Sri Lanka still has failed to address grassroots level issues, which prevent women from entering politics. Introducing compulsory female quota is not enough. Conservative mindsets which portray women engaged in politics as bad, uncultured women should be changed as the first step; education system in the country should be reformed to eliminate patriarchy system. Also, there should be strong laws to protect women from sexism, character assassination, physical and psychological violence. Women’s organizations and other civil society organizations have a great role in this.(END)