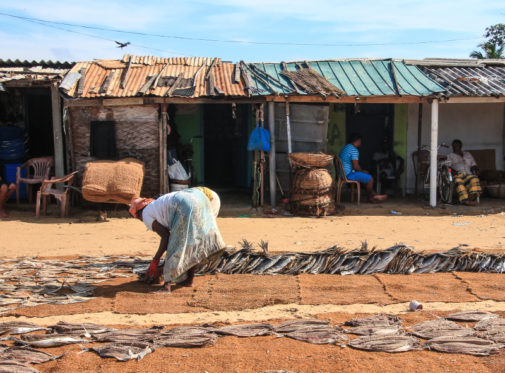 Manoja is a 50-year-old woman with one son and two daughters and lives in Pitipana village. Her husband is a fisherman and she sells the fish he catches at a road-side market. Fishing is their only source of income and her husband earned Rs1500 (around US$8) a day. Before the sand dredging started to fill the ocean to build Colombo Port City, their income was sufficient for their small family. But during the dredging he caught very few fish, not even enough for one meal for their own family.

Pitipana village is located near Sri Lanka’s capital Colombo, and is known for its coastal fishing and fishermen. When the fishermen go out to sea the women and children wait until the boats come to shore with their day’s catch. They then sell the fish at the road-side market. Their life changed when the sand dredging destroyed the coral reefs by spreading fine silt over them, which also destroyed the fishing grounds. They could no longer find reef fish, shrimp or crabs and their catch become very small every day.

The dredging is over but their lives are still in danger. Now, coastal erosion threatens her little home as a result of the waves that the coral reefs used to protect them from, and her back yard has already been washed into the sea. Her family is one of more than 3000 fishing families living along the western coast that are now suffering from the same problems.

Construction of Colombo Port City (also known as Colombo International Financial City) started following a secret agreement signed in 2012 between Sri Lanka’s former president Mahinda Rajapaksha (brother of the newly-elected president, Gotabaya Rajapaksa) and China’s current president Xi Jingping. The 269 hectare land extension was created by filling in the ocean next to the Galle Face Green (an ocean-facing urban park) and will be developed as a financial hub, a business centre and an entertainment location. The project is at the centre of China’s “Maritime Silk Road” and is a globally strategic part of the overall Belt Road Initiative (BRI).

The BRI includes thousands of mini and mega projects implemented by Chinese corporations in different continents. These projects are funded by Chinese banks as well as multilateral banks such as the Asia Infrastructure Investment Bank (AIIB). They have multiple environmental and social impacts and they bring economic problems too. For example, Hambanthota Port was built with a Chinese loan but was sold back to China in July 2017 when Sri Lanka was not able to repay it. Sri Lanka Ports Authority (SLPA) signed an agreement to lease the port to China Merchant Port Holdings for 99 years.

Hambantota Port was also constructed on a wetland once famous for migratory birds such as flamingos, and next to the harbor a 1000ha wildlife sanctuary had its status revoked in order to build other infrastructure related to the harbor. China’s lease agreement also includes control of another 15,000ha of land adjacent to the port designated for an industrial zone. The area includes forests and other important wildlife habitats, and is surrounded by five national parks which are also now in danger. Mattala International Airport is another BRI project that was constructed 18kms away from Hambantota Port. It was built across the Mattala Elephant Corridor, involving the destruction of almost 1000ha of forest and loss of habitat for over 500 elephants.

Colombo Port City is a multibillion project which will be built over the next 35 years and will still be under Chinese control even in the next century. The project has a number of socio-economic and environmental impacts, including the dredging of 65 million cubic meters of sea sand and the massive coastal erosion along the western beach that has been described above. The fishermen that have lost income because of it have not been compensated, but instead the leaders of fisherfolk organisations have been bribed to keep them quiet.

Unless they migrate internally it will not only be Manoja’s children but her grandchildren too who suffer from this Chinese investment. Her family has no money to buy other land. Even if they migrate to another location, Manoja and her husband only know fishing and cannot engage in other livelihoods. The political regime that approved these investments no longer takes responsibility for safeguarding her family. This is the fate of many women and families affected by this BRI investment in Sri Lanka.